The Birdsville Bakery: The iconic site continues to thrive

It’s one of the most-remote bakeries in Australia.

Maggie Triffett, who is one-half of the new management along with her husband Bruce, had only been in town for seven weeks before the postponed Birdsville Races got underway in April.

Despite being some 1,600km west of Queensland’s capital Brisbane, Maggie said it has been a fantastic and tremendous experience so far.

“It’s an oasis in the middle of nowhere,” Maggie said. 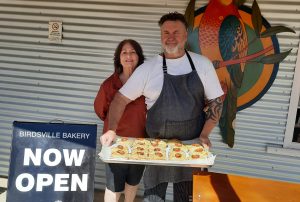 “We’re a long way from anywhere here so to find something like this out here is often a surprise for people but certainly a welcomed extra for people on their holidays here,” she added.

Perched by the dunes of the Simpson Desert, the Birdsville Bakery was originally opened by Birdsville local, the late Robert ‘Dusty’ Miller.

Built from scratch in 2004, the Bakery has since built a reputation for its tasty, and sometimes exotic pies. From kangaroo, rabbit and butter chicken to the more traditional beef but there is one pie that has been drawing travellers from far and wide.

For over 15 years, people have been coming to Birdsville Bakery for their curried camel pie, which was invented by Dusty.

However, after his passing in 2018, the recipe was lost.

The new owners, Talia and Courtney Ellie, who are also the custodians of the Birdsville Hotel, managed to track down his son and he eventually found the recipe.

And thousands of them did just that in April, with thousands of people descending on a town where only 40 to 100 people live.

So how does the bakery keep up with demand?

“For 48 weeks of the year we make the pies on-site but for weeks like this, the Birdsville Races and also the Big Red Bash, one man can’t do all that so we call on a few of our manufacturing friends,” Maggie said.

Be sure to visit the iconic Birdsville Bakery when you’re in town for the 140th anniversary of the Birdsville Races in September 2022.

If you’re yet to purchase your tickets, secure them today before you miss out. To get your ticket click here.