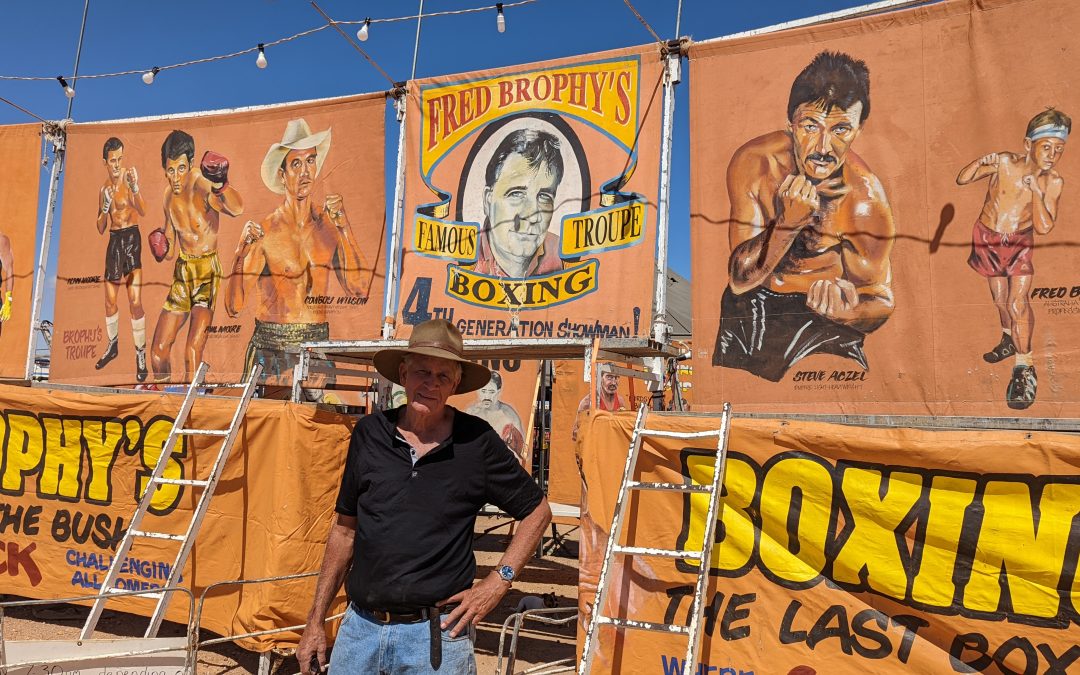 The legend of Fred Brophy is as true blue Aussie as they come.

A fourth-generation showman, his father was a side-show operator and his mum was a trapeze artist.

He began boxing at the age of four, thanks to his uncle Shelby Moore who owned a boxing tent. Inspired by his uncle and his love for the sport, all Brophy wanted to do when he grew up was own his very own boxing tent and run it himself.

Well after running a small sideshow service for a few years, Brophy’s dreams came true at the age of 25 when cousin Alan Moore gave the tent boxing game away.

Since then Brophy and his boxers have been travelling around Queensland to small outback towns and have become regulars at the Birdsville Races.

When asked about what his Boxing Troupe was all about, Brophy said it was ‘fair dinkum Australian entertainment’.

“This boxing tent is about Australia,” Brophy said firmly.

“It’s a bit of Australian heritage, it’s the last boxing tent left in the world and it belongs to everyone in Australia…I’m just keeping it going.”

For those who have never heard about tent boxing, it is a traditional form of a travelling show, where any takers can fight professional boxers for a cash reward.

When the drum starts banging and the bells start ringing, Brophy will put out the call to interested challengers to step inside the ring and have a go. There is never a shortage of challengers either and if you win you get paid for your trouble.

It’s not easy to put into words what Brophy’s Boxing Troupe entails because no two nights, two shows are ever the same.

“It’s something they’ve never seen before and they’ll be speaking about it for years to come because every show is different,” Brophy said.

“You can’t explain it…people ask what it’s like and they start to explain but stop because it’s hard to explain, you have to see it. That’s what I love about it!”

Beaver Brophy, or Brettlyn Neal as she was formally known,  has been travelling with Fred for the last decade, after she got her start at the Birdsville Races when she was working as security at the pub.

“My boss said, go over and have a go,” Beaver recalled.

“I fought and drew the first night then I came back the next, had another crack, and I won. I came back the third night and thought it would be on but then Fred said ‘you fight for me now’.”

Beaver then became a permanent fixture in Brophy’s Boxing Troupe, and has travelled Australia with him for the past 12 years.

Despite Fred saying he would retire on more than one occasion throughout his career, he has kept going on.

One reason why is because he enjoys seeing people have a good time and it wouldn’t be the same without them.

“It’s a great experience for those people that have never been to the outback and live in the city,” Brophy said.

“When they come out here they find out everyone is different and everyone helps each other out. That’s the reason why I keep coming back here, they’re just beautiful people and a great place.

If you’re yet to purchase your tickets, secure them today before you miss out. To get your ticket click here.