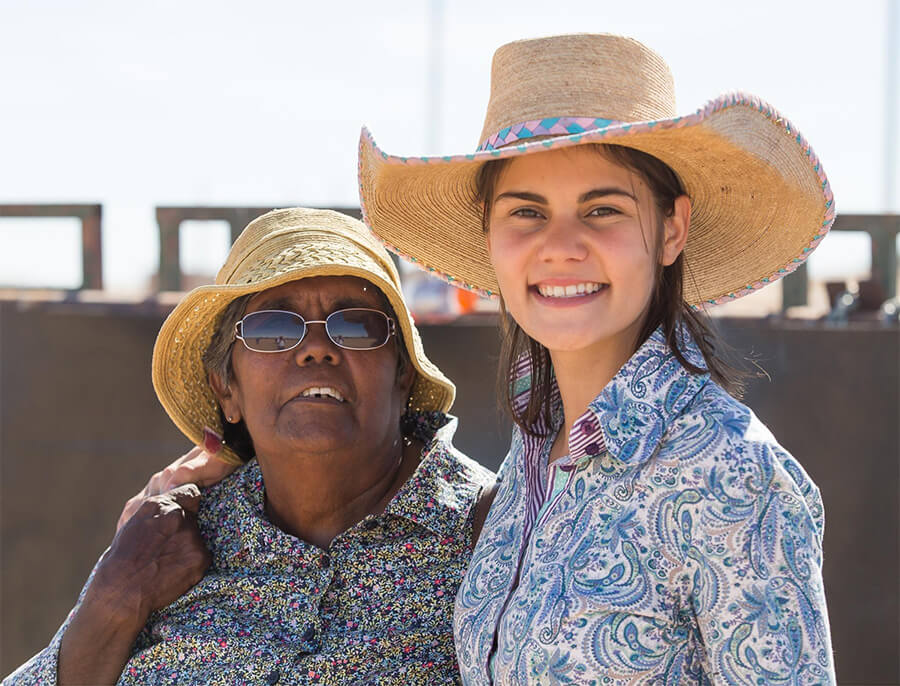 Sixteen year old indigenous model and cancer survivor Venessa Harris will head back to the tiny outback town she calls home next month as she takes up post as an official ambassador for the 136th Birdsville Races.

Harris is the first ever female ambassador to be announced for the iconic ‘Melbourne Cup of the Outback’, which runs this year from 31st August – 1st September.

Venessa’s family share a long and storied history with Birdsville – one of Australia’s most remote towns on the edge of the Simpson Desert that houses a general population of just 115 residents. The young aspirant model was born in the region, while her Grandparents still live in Birdsville – and her older sister Amber calls nearby Durrie Station home.

“My grandfather, Kevin (Spinny) Monaghan, and uncle, David (Ted) Monaghan, have both ridden in the Birdsville Cup. And I’ve been to the races when I was too young to remember,” Venessa Harris says.

“I’ve heard so much about them, and can’t wait to get back to Birdsville to be part of the Races as an ambassador. It’s such a privilege to be part of such an iconic event – especially when my family has such a close connection with the event and the region,” she adds.

Birdsville is located 1,590 kilometers west of Brisbane, 1,940 kilometeres from Sydney, and 1,193 kilometeres from Adelaide. The town, which swells to host more than 7,000 over the weekend race-meet, is located on land traditionally owned by the Wangkangurru Yarluyandi people, in the Channel Country of far West Queensland.

After winning a major competition in Brisbane at the tender age of 12, Venessa was on the brink of launching her modelling career when she was diagnosed with bone cancer.

“I had to put everything on hold and spent the next 12 months in Brisbane being treated and learning to walk again, before returning home to the Darling Downs to recover. I am in a stage called No Evidence of Disease (NED) now and feeling great, and see the Races as a great opportunity to gain some experience, have fun and represent this region which I love so much,” adds Venessa.

Venessa and her family travel to Birdsville every year to visit family and friends, and still term the trip “heading home” despite now basing themselves just out of Mackay, Queensland.

“We have such strong link to not only the Birdsville Race Club, but also the people and the land. The region is my family’s traditional land. I want to share with everyone how beautiful this part of the world really is, I have attended many Race weekends throughout my life,” Venessa says.

“It’s amazing for Venessa to be an ambassador for the Races – and to be able to give back to the local community. It’s the women of the Outback who drive these regions and underpin their success – and they’ve been with Venessa body and soul during her treatment with cancer,” says Venessa’s mother, Karen Monaghan

“The community members of the Diamantina Shire helped us during Venessa’s treatment, and we’re excited to go back to re-connect with everyone who showed us so much love when we needed it the most,” she added.

A keen horsewoman herself, Venessa rode in Gymkhana competitions before being diagnosed with cancer – and she looks forward to getting back in the saddle.

“I have made it back on to a motorbike but not my horse just yet. Who knows, maybe I’ll go for a ride on the sand dunes when I’m back in Birdsville,” Venessa says.

“We’re thrilled to have Venessa on-board as an ambassador for the 2018 Birdsville races. We’ve been lucky enough to have some high profile supporters like Melbourne Cup-winning Black Caviar trainer Peter Moody, but Venessa is our first female ambassador,” says Gary Brook, Vice President,Birdsville Race Club.

“It’s fitting that her family have such a strong connection with the Races, and we’re excited by her genuine passion and love of the region. We couldn’t have hopped for a better fit,” Brook adds.