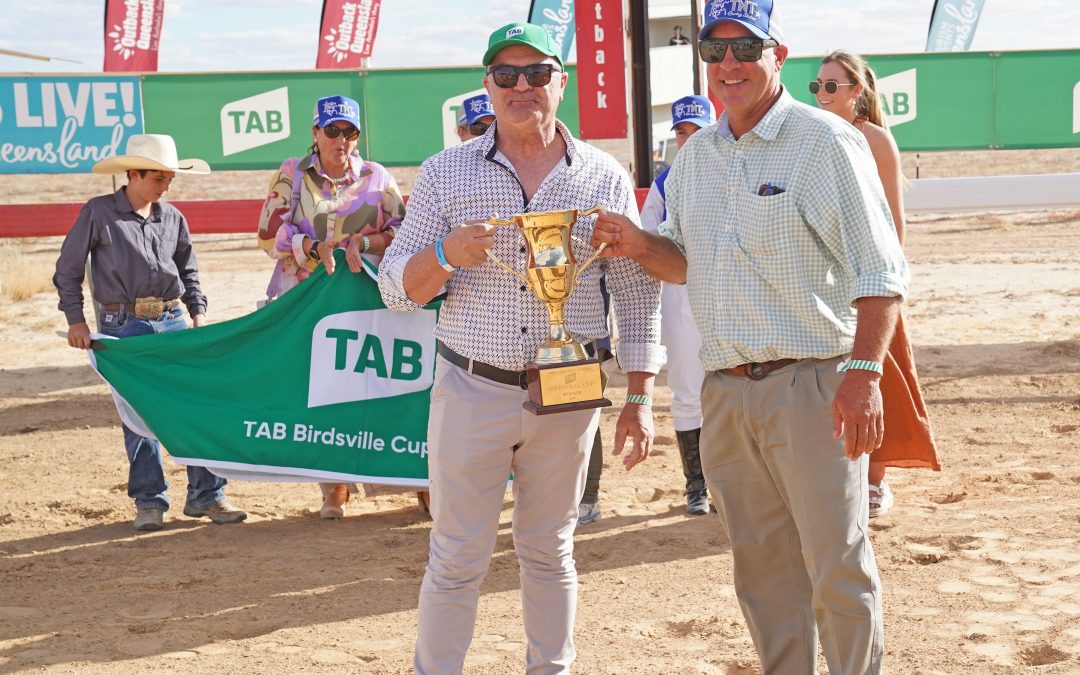 Big bonuses and bragging rights are on the line for Barcaldine bush trainer Todd Austin at this September’s 140th anniversary edition of the Birdsville Races. Not only will Austin be aiming for a fourth Birdsville Cup win in nine years, but he will also be gunning for the biggest trainer bonus in TAB Birdsville Cup history.

Austin, a former jockey and 2021/22 Queensland Country Trainers Premiership winner, took out the April 2022 TAB Birdsville Cup with gelding Echo Point – and if he manages to train back-to-back Cup winners this September, he’ll nab himself a hefty $10,000 bonus on top of his regular race winnings.

A September Cup win will also elevate Austin’s legacy as the most successful TAB Birdsville Cup trainer of the 21st century. He previously won the legendary outback race with Primed in 2013, French Hussler in 2019 and Echo Point in April 2022.

“It would be amazing to win another Birdsville Cup on September 3rd. It’s crazy to hold the title of ‘Most Successful Birdsville Cup Trainer of the 21 st century’. We’ve still got seventy-eight years to go to decide that one – but hey, I’ll take it while I’ve got it,” Austin laughed.

“Jokes aside, my Birdsville Cup record is definitely something I’m proud of, and I have such a long history with the Birdsville Races, so it’s pretty special,” Austin added, noting that he’s attended more than 25 Birdsville Races as both a jockey and trainer since he was a young boy.

This September’s TAB Birdsville Cup offers up a $42,000 total prize purse before bonuses.

This year, the Birdsville Race Club offered bonuses of up to $15,000 to any trainer who nabbed a TAB Birdsville Cup win with the same horse in both April and September 2022.

Unfortunately for Austin, he won’t be able to field Echo Point in this September’s Cup – quashing his chances of winning the full $15,000 bonus. Nevertheless, he said he’s still intending to run a horse in the Cup, which will keep him in contention for a $10,000 bonus.

This extra $10,000 paycheque is the biggest in TAB Birdsville Cup history.

Austin is also planning to field additional gallopers over the two-day 13-race carnival and likes his odds of picking up some extra wins come September 2 & 3.

“At this stage, we will probably take around ten horses to Birdsville and I think we’ll have at least one set to race the Cup,” Austin said.

Austin is quick to acknowledge the efforts of his team and family in his Birdsville success. He works closely with his wife, Toni at their home stables in Barcaldine – training horses alongside her.

“We hope Toni can travel out with us again in September – if her work’s too busy at the time we’ll have to fly the flag for her,” added Todd.

The couple is part of several syndicates which co-own the horses they train, and they work with a stellar team of bush jockeys including fellow Barcaldine dweller Brooke Richardson, who rode Echo Point to victory in the April 2022 Birdsville Cup.

Richardson is planning to join Austin for another tilt at the Birdsville Cup in September.

While not at April event levels, the Birdsville Race Club will continue to provide significant travel bonuses and incentives for trainers and jockeys that participate in the upcoming Birdsville Races. For the September 2022 Birdsville Races, the Club is offering:

The countdown to the historic 140th anniversary edition of the Birdsville Races is well and truly on, with under a month until the ‘Melbourne Cup of the Outback’ reignites the tiny desert town on the edge of the Simpson Desert with thousands of revellers for an outback party and race carnival like no other.

Kicking up the dust this September 2 &amp; 3, the Birdsville Races have evolved over more than a century to become a bucket list experience for intrepid travellers, racing enthusiasts, grey nomads and culture vultures alike.

The tiny township of Birdsville – home to a general population of just 115 residents – swells to host thousands for a renowned two-day 13-race carnival, as well as a bumper program of wild and wacky outback entertainment and activities.

From Fred Brophy’s legendary travelling boxing troupe – the last of its kind in the word, to Fashions on the Field, and colourful festivities in and around the famous Birdsville Hotel, the Races transport punters into a bygone era of true-blue Australiana in the unique heartland of the Outback.

The Birdsville Races are proudly supported by the Queensland Government, through Tourism and Events Queensland, and features on the It’s Live! in Queensland events calendar.

The Races attract visitors to outback Queensland from the beginning of August, who set up camp early to enjoy the region’s yabby races, street parties and various other events that lead into the big Friday and Saturday race days. The Races also provide a much-needed social event for remote property holders and communities, as well as a vital economic boom for Outback Queensland.